Nokia Mobile is gradually rolling out Android Pie update to its smartphones. While global phones are secured by the promised updates under the Android One program, the Chinese variants are also consistently receiving updates. The China exclusive Nokia 7 (2017) with product code TA-1041 is now receiving the Android 9 (Pie) update.

Unlike global phones, the changelog published to Chinese variants is much more detailed. This can also be due to the fact that there’s a lot which is included in Chinese ROM as compared to Android One. Here’s a quick overview of the Android 9 update for Nokia 7 (C1N).

The update also packs the Android security patch for the month of November 2018. It is now available for download with a size of 1663MB. The update revision (build id) is 340C.B02.

The Nokia 7 was launched with Android Nougat (7.0). It has so far received the Android 8.0, then Android 8.1 and now the Android 9.0 update. It is unclear if they will push one more major release of Android, but so far the support is very good. 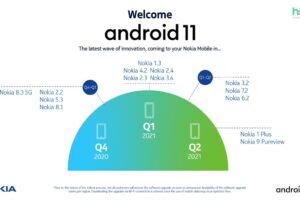