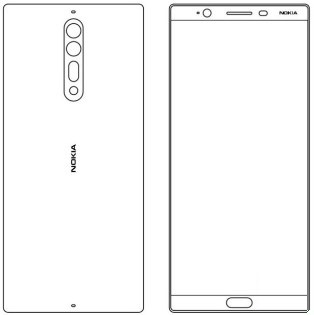 HMD Global is rumored to reveal a flagship device which is likely to be called Nokia 9. Launch of it is scheduled sometime in the third quarter of this year. That’s not that only Nokia 9  is coming, there are many ongoing topics that the company is also working on Nokia 7 and Nokia 8 smartphones. We had posted sketches for the same few days ago here. However, there is no official confirmation on the existence of these smartphones and we can’t clearly say anything about it right now.

Two sketches have leaked today that are said to be aligned with the design of the upcoming Nokia 8 & Nokia 9 models.One of the design sketches show a bezel-less design and there no fingerprint scanner at the front. There are rumors that Nokia 9 is going to feature an iris scanner,so we can expect the fingerprint scanner to be placed at the back at shown in the image.Both the sketches shows the presence of a dual-lens camera at the back.

One seems to have significant bezels and a fingerprint scanner at the front as the same seen in Nokia 5 or Nokia 6.

We would suggest you to take these leaks as a pinch of salt until there is a official  word from the company. But we know for sure, we will get to see more leaks from HMD as the company is all set to announce six or seven Android smartphones this year and only 3 are out yet. So 3-4 smartphone are still on the way. 😉
What’s your opinion on these sketches? Let us know the same in the comment section. 🙂