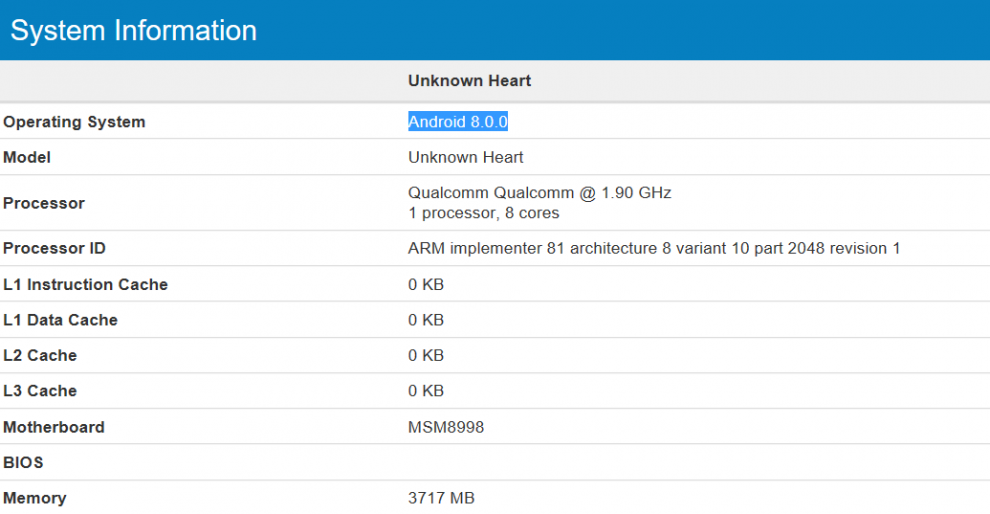 A new entry of an “Unknown Heart” device has appeared at Geekbench. The entry shows the device to be running Android 8 (Android O) on a Snapdragon 835 processor and 4GB of RAM.

All the “Unknown Heart” entries have belonged to Nokia devices. So, this one is also a Nokia. The Nokia 8 has leaked a lot of times already with Snapdragon 835 and 4/6/8 GB of RAM combination. And it is easy to conclude that the Nokia 8 is what HMD will launch in its London launch event scheduled for 16th of August.

Android O is reported to start seeding to Google Pixel phones starting next week. So, HMD Global can take advantage of the situation and ship the Nokia 8 with Android O after Google makes the operating system official and provides a name (Android Oreo?).

On the other hand, it could be just that HMD Global is only testing and compiling the Android 8 ROM for the Nokia devices and the update will be pushed at a later date, rather than than offering it out of the box on Nokia 8. The Nokia 8 could still become the first Nokia device(s) to receive the Android 8 update.

HMD Global can get quite some publicity if it manages to upgrade Nokia 8 (and other devices) to Android O before any other OEM manages to do so!

Via – Wonderful guys at NokiaMob